I would like to start this by saying that I am not often one for moe and kawaii stuff but there are those Japanese products that compel you to make exceptions. The first volume in, what may be the beginning of something really awesome, the Neko Para series is one of them. While perusing through the Dealer’s Room recently at Anime USA, I came upon this game at one of my friend’s booths, Collector’s Anime. Considering the fact that it was sold as a Steam card, it seemed the perfect addition to my collection. After figuring out that non-Steam OS games and Linux don’t mix, I bought the Regular Edition and settled in to play, for how long I didn’t know.

Our hero, the aspiring pastry chef Kashou, is starting out on his own as a newly-minted shop owner after leaving his family behind to pursue his love of baking. That is until he discovers two of his family’s catgirls, the cheerful Chocola and the reserved Vanilla, have stowed away for the ride. Stuck with the madness of opening his new establishment while trying come to terms with being a new guardian to two catgirls, a hilarious and heartfelt story follows. All the while, he comes to realize what he lost when he tried to strike out on his own. From the first click to the last on the dialog box, the outstanding writing and storyline give the reader an immersive experience to the point where you can truly feel as if you have become Kashou-sama, seeing it through his own three dimensional sight, not a 2D computer screen. To add to this incredible interactive experience is a combination of sight and sound that conveys the mood as good as your favorite anime. The still graphics and animations are spectacular, very well mimicking live action movement to the point where one’s eyes can be easily tricked (yes, even the H scenes, you perverts). The character’s are drawn with remarkable realism right down to the “chest bounciness” of the catgirls, which can be adjusted to the player’s tastes and actuated at any time. The soundtrack astoundingly conveys the mood in a style reminiscent of the easy listening music of the late 1990s and early 2000s with the usual Japanese audio motifs. However, the most interesting feature to Neko Para is the character voice acting, which is even more immersive to the viewer than the written dialogue. I don’t care how tough of a man you are, when Chocola cries, you are going to get choked up. Shigure’s sugary sweet voice gives an added dimension to her love and devotion for her Nii-sama as well as her own cuteness. Furthermore, the tones and emphasis lend themselves perfectly to the animation and action in each and every scene.

Though a very finely polished visual novel, there are a few points that must be noted. This is a kawaii/moe game, which means the female characters are portrayed in a youthfully cute manner. This can wonder into near lollicon territory. If you are not comfortable with such things, beware. Furthermore, those who can not understand the Japanese tongue-in-cheek incest humor, you should bear this warning in mind. While I could expound more on these ideas, I think these things are better left to otaku-produced YouTube videos than a review article.

For those who do like moe and kawaii visual novels and can appreciate a really interesting story of a young man’s struggles with love, dreams, and family, I suggest you take a bite out of the story of La Soleil in Neko Para. You’ll find yourself staring at your screen as intently as a cat to a feather lure and leaving you so elated you simply just want to purr. Meow! 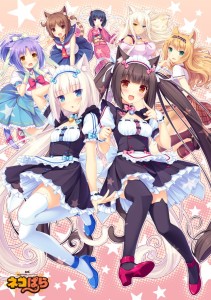