I found myself once more in a delicate situation only a veteran fanboy could find himself in, working a convention while keeping his eyes glued to a smartphone screen waiting on a product to go online. I was working my usual media gig at MAGFest while anxiously watching the Denpasoft website. Almost four months earlier, I had done the first volume of Neko Para and was absolutely astounded. Then I found out that a sequel was in the works and glued myself to the Neko Works Twitter for the next several weeks. After a long wait, it was finally here. Then came the call that almost spoiled it. A media gig for MAGFest on the day of the release. Thankfully, I was able to finish work and get signal the minute it went up. I bought it posthaste, hoping for another great weekend of visual novel nirvana. I got home and loaded it up…and I’m still in awe all these days later.

We once again find our hero, Kashou Minaduki, running his bakery, La Soleil, with his beloved catpanions, Chocola and Vanilla, along with the rest of the Minaduki family catgirls and his adorable yet terrifyingly obsessed little sister, Shigure. With the growing popularity of the bakery, Kashou has now come to rely upon the astounding managerial acumen of the oldest catgirl, Azuki, and the great physical strength of the younger catgirl, Coconut, to keep his business booming. Unfortunately, these two sister’s are constantly at each other’s throats over the most trivial of matters, much to everyone else’s chagrin. When Chocola and Vanilla have to leave town to retake their Bell tests, Kashou is left holding the cat-filled bag of trouble between these two. After a number of heartwarming and dramatic scenes, leading up to a climatic fight and runaway, these two sister’s finally realize that their familial bond is deeper than they realize. Thereafter, Kashou sees these two in an entirely different light and becomes closer to them. Then, with the help of his devoted, if overzealous, twin catpanions, he engages in a full-fledged romantic relationship with the two of them. The story ends with Kashou more bonded to his catgirls than ever before and a future much more assured than when we last left him.

I will start by saying that Neko Works and Sekai Project have once again given us a winner. To start with, the graphics are much improved from the first volume and the rendering of the animations is more refined and smoother with no discernible distortion. They really took the time to make sure that every movement and transition was as fluid as water. Of special note, the new “talking head” feature during certain dialogue sessions is both a novel and excellent addition the game and gives it a sort of old school video game motif that really appeals. The artwork is even better than the previous installments with better color and texture, giving us an even more lifelike appearance. The very good 3D-like experience of Volume 1 has been made vastly more realistic with the addition of more facial expressions and body language, making you feel as if you are Kashou-san. Combined with the “pet” function (first introduced in Volume 0), I really feel like I’m holding Coconut’s hands to reassure her of her abilities and I really am tussling Azuki’s hair in praise of her good work. Adding to the sensory experience is the improved audio and sound effects. Neko Works has retained much of the original soundtrack but the new tracks, especially the new theme song,, Dokidoki Kokoro Flavor, add even deeper mood and spirit to the experience. Combined with a well written script, containing a ton of cat-based puns and, what I best describe as, catcabulary as well as the stellar voice cast from the earlier games, you have a truly immersive experience that does one better on the previous volumes of this outstanding series.

Moving on the the story itself, I am glad to say that this was so worth the wait. I must confess this was especially true of the elements involving Coconut. She was and remains my favorite character of the series thus far, so to have her as one of the central characters was very much one of my biggest motivations for owning the game. What I got was more than I bargained for though, from her Supergirl-esque rescue of Milk to her self-esteem issues to her struggles to express her feelings for Kashou (thankfully solved by the ever cheerful and effervescent Chocola), I truly embarked on an emotional roller coaster. In particular, I really felt the profound drama of the fight between Coconut and Azuki in the shop that one night. I must confess that when Coconut cried while talking to Kashou and Azuki,my heartstrings were being painfully pulled. I don’t care how tough a guy you think you are, you are going to get in touch with your sensitive side there. Also, seeing Azuki’s two-sided personality, the tough, sarcastically-armored girl with miles of heart underneath, was something that I found strangely relatable and touching. However, the romantic interludes and moods in both acts made me feel the deep love of the characters in my own mind and that was the one attribute that was constantly thought about as I played the game. Overall, the storyline and character development was spectacular and quite fascinating.

There are two points though that must be addressed. First, the story ends rather abruptly after Kashou and Azuki spend the evening together, which was a bit of a letdown for me. I wanted there to be another scene where the two new catpanions bond more with Kashou or a dramatic scene to give an extra thrill, like the final chapters of the first volume. Sadly, it ends on a bit of a cliffhanger, albeit a positive one with Cinnamon and Maple hinting at what is to come. That said, I think it was over too soon. Finally, there is a matter involving one of the H scenes, a warning to the viewers. The scene involving Kashou, Vanilla, and Azuki is quite an intense one and may be disturbing to some players. For those of us who have been around the block a bit, we understand what is going on but it may be shocking to the uninitiated. Player discretion is advised but, I reckon, rarely heeded. I’m not sure whether it’s something to consider in future installments but it certainly raised a flag in my mind, though not exactly a red one.

These factors not withstanding, I found the game to be a great experience and I enjoyed every moment playing it. It was one hell of a wait but I have been left feeling it was more than worth it. Now, I certainly hope that Neko Works is hard at work on Volume 3 and I expect to see it later this year. If it doesn’t happen, I for one will be profoundly hissed. This being said, Neko Para Volume 2 is the cat’s ass and will leaving you perpetually purring. Meow!!! 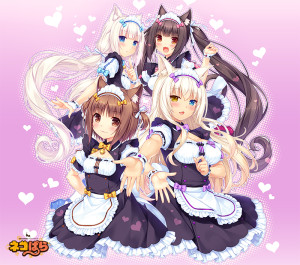 CHECK OUT THE REVIEW OF VOLUME 1: http://www.blackflagspecialk.com/2016/03/nekonomics-brought-to-life-a-review-of-neko-para-volume-1-sekai-projectneko-works/