OK, everyone, I know I have a tendency to do visual novels and the like but I opted for something completely different for my next review. On launch day and after a long week of work, I was ready to spend my weekend journeying through Sakura Dungeon, a new fantasy RPG brought to you by the fine folks at Winged Cloud and Sekai Project. I thought this would be a relatively quick game that I could complete in the space of three or four days. A little over three weeks and a pile of Mountain Dew Black Label cans later, I think I have sufficiently annihilated all resistance to the fox spirit’s reconquest of the dungeon. Through it all, I have lost hours of sleep, my temper, and, potentially, my mind while going on this epic journey to find out who took over the dungeon and how this motley crew of fantasy characters will get it back. It was a tough run but I couldn’t walk away from it. Lord knows, I tried.

Our story begins when the intrepid and hotheaded adventurer Ceri comes across the sealed fox spirit Yomi while investigating a dungeon for her guild. After unsuccessfully battling her and finding out that Yomi’s former dominion, that very dungeon, has been usurped from her, Ceri agrees to enter Yomi’s service to take it back. As they attempt to do so, they came across a whole coterie of guards from maid-uniformed catgirls to a succubus and even a pair of twin sister reapers. They are also joined by old friends Maeve, Ceri’s guild master, and Sylvi, Yomi’s former dark elven protégé, whose presence causes their fair share of tension and drama. Despite being a bit of a hodgepodge, they become a force to be reckoned with as advance through each and every level of the dungeon. You, the player, shall determine exactly how they go about it and who should be in the party. Choose wisely, though, or your characters may find themselves in compromising, exploitative, or even dangerous situations. That said, the ability to slash the clothes off these fearsome opponents and the eye-candy ecchi cutscenes make the struggle all worth the risks. To top it all off, you’ll be refurbishing Yomi’s old wardrobe of swimwear, lingerie, and other exotic get ups, giving our two chief heroines quite an appealing aesthetic as they battle this hoard of malevolent yet moe monsters.

I would like to say that much of this game is finely crafted and executed. The story is really well-written with the proper mix of drama and comedy. This is especially true of the arguments between Ceri and Sylvi, fighting for Yomi’s attention and praise, but also in respect to Yomi and Maeve, who both seek Ceri’s best interests as they see it. Not only moving the story along, these frictions become the catalysts for some really interesting scenes as the game progresses. Then there is the constant gag of Ceri being subjected to Yomi’s fashion sense, much to her chagrin and embarrassment as well as contrasting her paladin-like purity against Yomi’s more liberated worldliness. Combine these things with a healthy dose of heartwarming interludes of romance and camaraderie, epic boss battles, and certain objects, including two reluctant knights, being used for relief and entertainment purposes and what you get is a story that is guaranteed to get you hooked no matter how difficult the levels get. The plot firmly follows the lines of a fantasy JRPG, very similar to the Hyperdimension Neptunia series as a matter of fact, but the mixture of Japanese anthropomorphic character types and the ability to recruit former enemies make it truly unique. The art is well done for both the characters and backgrounds, utilizing crisp and clean lines with just the right amount of animation to convey the action and emotions without losing it’s simplicity. Furthermore, the character designs and, in some ways, personalities of Yomi and Ceri were certainly derived from Mieko and Hiromi from Sakura Swim Club, which was of great appeal to me and something I hope is retained in future titles of this series. The music is quite good, ranging from tin whistle-based Celtic themes to airy ancient sounds in the pyramid level. Although it did get a bit repetitive, especially those related to battle sequences. This fact notwithstanding, it certainly conveyed the mood and ambiance admirably for such a simple soundtrack. So as far as the aesthetics of the game are concerned, they are in very good order.

Unfortunately, there are some significant shortcomings with this game and, I’m afraid, they happen to be with some of it’s more core aspects. One of the chief issues is with the leveling of characters. Under normal circumstances, it takes quite awhile to level each character and this assumes that you are fighting characters of the same level or a little higher. Such requirements mean grinding and when you consider the fact that each character must level up by a factor of two to three levels to have a good chance of success against the boss on each floor, it adds up to quite a lot of effort and time being expended before this is possible. Though I do concede this is a common aspect of the genre, I think the amount of combat the player has to do to raise each character’s level borders on excessive. This wouldn’t be as much of an issue if the ability of gaining group experience points in battles were not limited to Yomi alone. It would also have been a great improvement if you could use all six of your fighters in battle rather than having to manually rotate them in and out of first line and second line positions. Many times, a player may find themselves in need of both Maeve and Ceri’s blades as well as Yomi and Sylvi’s spells. If all six chosen characters had been able fight together, certain floor bosses might have been cleared a lot more quickly. Furthermore, it would allow the player to more flexibly fight the many types of guards on each level, whose resistances to fire, poison, electric, and ice attacks can vary greatly. This is even more true in the higher levels when you deal with characters like the reaper twins, who can deploy magic shields at random during battle, or those floor bosses with the Dual Soul capability, which allows them to almost completely heal themselves in the middle of combat. Then again, the ability for any character in the player’s party to heal in mid-battle might also have been an excellent addition to the game. It certainly would have made the fight against a certain mystical warrior a hell of a lot easier. Another issue is the floor challenges, like the one on the Shrine floors where you had to walk a certain set of paces in a certain amount of time to open a door before it relocked or the disorientation tiles in the Abyssal level that force you to navigate by dead reckoning. Unless you really paid attention in game theory, you are going to have quite a challenge on your hands. This added difficulty, when guards are factored in, seems to tax the player to the extreme, having to juggle their paces, time in battle, and how they are going to defeat this guard and proceed. Considering how they seriously impede the player’s progress, I think, with respect, these things should have been omitted. Now, I would like to take a quick moment to note that these things do not condemn the game but rather show how this potentially phenomenal game missed the mark, in the words of Max Smart, “by that much.”

Considering all the facts and my own experience with the game, I did, in the end, like it a great deal. It is true you may find yourself frustratingly walking out of the room, muttering incoherent profanities under your breath as you try to figure out how to beat each floor, but you will find yourself coming back to take a second crack at it time and again. This is actually quite a rare trait to be found in a game today, which is one of the main reasons why it should be praised. Winged Cloud has given us a game we can’t refuse no matter how difficult it may be. Furthermore, it has so many great attributes, you can’t be frustrated for long before you find something to like about it again. Perfectly balanced, no, but pretty close to it. Besides, watching Ceri flip out at latest outfit she’ll be forced to wear and the yuri subplots should be more than enough of a reward for the effort. Even without the gameplay, it would still make a hell of a visual novel on just the story and art alone. Try getting that out of your average fantasy RPG, gamer boy! If you’re willing to put in the time and effort, you will be rewarded by one of the most novel fantasy games you can play. Hail to the dungeon mistress, baby! 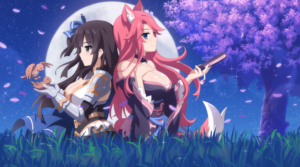 CHECK OUT THE REVIEW OF SAKURA SWIM CLUB: http://www.blackflagspecialk.com/2016/03/into-the-wild-blue-depths-a-review-of-sakura-swim-club-sekai-project-winged-cloud/