Let me start off by saying that it’s rare that I am at a loss for words upon completing a game that I am reviewing or, even more profound, completely changed in my impression of it from when I began it. More interesting, I thought it was going to be something I wouldn’t be playing for long periods of time. Well, I guess one should truly expect the unexpected. I picked up the latest game from Sekai Project, Neko-Nin exHeart, while I was pursuing one afternoon. I thought I was in for a game that would give me some decent entertainment between my preparation for an upcoming computer course and my daily job grind. Several days later and nothing else having my undivided attention, I am still in awe of what I have just played. In fact, I was forced to reflect on it for some time to find the words to describe it for this review. After much contemplation, I think I have found the words to do this visual novel justice.

Neko-Nin exHeart is the story of how everyday student Haruki Houjou has his humdrum life interrupted by the Demi-Human duo of catgirl ninjas, Yura and Tama Fuuma, who have come to pledge their fealty to him as their lord for the sake of their hard-pressed ninja village. At first, Haruki is unconvinced and turns them away only to find them that very night sleeping in the garden right next to his bedroom window, which in turn compels him to cover them with a blanket. What follows is an exciting journey of a young man struggling to support his two cat girls and balancing their romantic jealousies between each other for him all the while trying to hide them from his family, friends, and teachers. Through it all, Haruki uncovers the truth of their mission and finds out what really in his heart. He also gets to escape his mundane life and take a walk on the wild side in more ways than one. For their part, Yura and Tama use their ninjutsu to great comedic effect in a number of instances, from releasing a swarm of bees to deal with a certain teacher to mirroring their master’s form in attempt to get an apartment. Combined with a mysterious transfer student, another shadowy ninja catgirl, and parents who are never home, this thing has all the comedy and drama that makes for a well-made visual novel and, perhaps, an anime. Even better, the ending leaves us with a possible plot for a sequel, which leaves me even more intrigued.

In respect to Neko-Nin’s attributes, I think this was an astoundingly crafted and executed visual novel. The art has aesthetic all its own with variability in camera angles in the backgrounds as well as the many different character designs used. All the designs are crisp and very well detailed, especially in respect to the CG scenes, which I really liked for their ability to convey the mood of a scene just as well as the writing. The animation was also pretty decent. The story was well written and kept me riveted to my computer for hours on end. It captivated and made me feel every emotion of every scene to the point where I really could see it through Haruki’s eyes. The audio component to this visual novel was also quite good. The vocals were superb and were fitting to each character in terms of both intonation and pitch. However, the secondary vocals in certain scenes tended to overlap the main dialogue, which made it indecipherable at times and mildly annoying. That said, the vocals and their accompanying sound effects were a great aspect of this game. However, it’s greatest audio attribute has to be its music. Nothing conveyed the sensations, actions, and mood better than the soundtrack, especially the track for romantic scenes. This particular piece seems to share more than a few riffs with Atlantic Starr’s Masterpiece. Whether this was intentional or not, it was an excellent inclusion to this game and I don’t think any other composition would have been better. Finally, I would like to talk about a rather nerdy technical aspect of this game that I think is quite unique to it. Whirl Pool used a setup that allowed for 150 regular save cells and 30 quick save cells as well as a set number of autosave cells. This I found to be very useful for a game that, despite having a single ending, has multiple paths to that ending. Considering that all of these need to be explored to fully complete the game, you need a lot of save cells. I also like the autosave feature for key points of the game though I do wish it included the decision points so that one could go back and explore the alternative storylines in a quicker and easier way. However, this would be a minor improvement on an already exceptional setup.

Considering my own thoughts on the story, I have to say that I am not unimpressed in the least. It grabbed me by the belt buckle and refused to let go. I felt genuine feelings of sympathy for Tama and Yura’s living situation, just as Haruki does in the story. I also liked that our protagonist had a face to his character and that it was regularly shown throughout the story in the CG art, something I don’t see as often as I’d like in visual novels. Speaking of the CG art, I like the variety of styles used from simple chibi motifs to very anime-like designs. So, if you’re in the mood for a romantic comedy with plenty of action and drama that you can’t put down, look no further. So sharpen your claws and kunai and prepare yourself for the purr-fect game you seek! 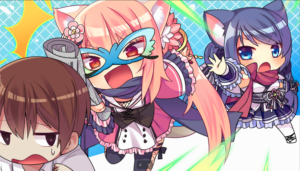