Like as so often before, I find myself in a great dilemma. I have so many games to review and not much time to do them all simultaneously. I would have liked to have written this review sooner but things have been crazy. Better late than never, though. I was scanning the Sekai Project website awhile back before the holiday and saw the much anticipated new title from the fine folks at Cosmillica, Love Guitars, and The Nashville Skyline, was up for acquisition. After much wrangling, I was able to get a copy and load it up. Then life happened and my much anticipated game found itself on the back burner. After some time, I found my day jobs began to require me to sit down to game every night just to open the safety valve. Since I had a particularly heavy week recently, I decided to run the game I had been saving for a special occasion and booted it up. It’s several days later and I am still contemplating what I just played through.

Our story follows the journey of Amanda Etheridge, a hard-working exec who has been commanded by her boss to take a vacation despite the company having major issues with an upcoming project. Deciding to go somewhere she hasn’t been before, she goes to Nashville. There and after one hell of a night that she at first cannot recall, she finds herself quite literally involved with a troubled troubadour named Juliet Sutherland. With nothing better to do and warming up to the idea of a fateful adventure, these two newly minted lovers embark on a whirlwind tour of the upland South searching for enlightenment, inspiration, meaning, personal growth, and romance while examining the complex thing that is the American experience. Along the way, things are complicated by Juliet’s past, her little sister, and Amanda’s cloistered nature. From these elements, we get a story of an artist discovering her voice and another who finds a new mentality from the simple act of escaping one’s mundane environment akin to a famous generation of postwar writers who also took to the road for the same reason. That’s right, this visual novel has a Beat pedigree. What the audience gets is all the comedic and dramatic elements that make for a smashing visual novel as well as, hopefully, an OVA. The drive-by smooch just after the credits also seems to indicate that we might get a sequel too.

In regard to specs, I think Cosmillica has made great improvements from Atom Grrl. The art has been suitably improved but what amazed me most was the use of minimally processed images for the backgrounds. From my perspective, I am not as much of fan of visual editor effects as others. So, to see these kinds of imagery used in such backgrounds was quite interesting. It is also worth considering the fact that I noted this very issue in my review of Atom Grrl and, it seems, Cosmillica may have taken this into account for this game. For that, I thank them. It really is awesome when a company is receptive to user feedback, if this be the case. The voice acting and character renderings were outstanding, the kind of quality I have come to expect from this developer. The music was, however, quite an exceptional element. Overall, the soundtrack seems to put a focus on the folksy and outlaw subgenre of country music, which is the “non-Music Row” kind of sound that fits perfectly with the theme of the story. There are also hints of 1990s indie guitar artists as well, which fits Juliet’s personality, half Jewel/ half Alanis Morrissette. However, the most interesting element was the opening theme. In the last game, I spoke of the opening music evoking the spirit of one of my favorite 2000s bands, CKY. Perhaps in that vein, they gave me a theme that seemed to be reminiscent of Dog and Butterfly by Heart. The only question in my mind, though, is who is the dog and who is the butterfly? As such, they’ve produced another outstanding game in these aspects.

Before closing, I would like to thank Cosmillica for giving the Commonwealth of Virginia such a marvelous showing in this visual novel. I almost leaped to the ceiling when I saw the image announcing that they had arrived in Virginia, which is from the southbound portion of the Woodrow Wilson Bridge on the Capitol Beltway. Though this image is from the north of the state, it’s still the same welcome sign greeting you down south. I also really appreciated the attention to detail when they talked about small towns and cities like Woodstock and Bristol. To those who’ve never been there before, Woodstock is really like that, small town America in all it’s glory. However, I fell back out of my chair when I got to the part where Juliet’s sister, Emmy, goes on the run to Winchester. The image for it shows the exit for Winchester if you’re going southbound on US-29. I have been down that way many times as well. In fact, I think I may know what bakery they are referencing when they find Emmy in the town. Finally, most of the commentary in this part of the story had positive air to it, especially Juliet finding her artistic voice in Bristol. So, once again, thank you for showing that Virginia really is for lovers.

Naturally, I really liked this game and it truly was successor to those that came before it. If you like great journeys on the open road or just want a yuri game with a great plot (in more ways than one), then definitely give this game a shot. Pick up your guitar, grab your denims, and gas up the pickup for one hell of an adventure. Y’all come back now, y’hear! 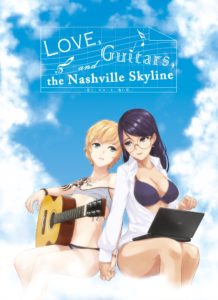