I have seen many visual novels from Japan over the years. Many are your typical fan service and late night novelty type whose story line is written as such that you end up laughing at that alone. Then, on an unrelated search for another visual novel rendered in a usable format for my computer, I found Sakura Swim Club, the latest chapter in the Sakura series from Winged Cloud. I thought I was going to get a Friday night jolly for cheap. It’s now been a week and a half and I can’t seem to not crank it up over and over again.

To begin with, the story of Kaede, our playable and unseen hero, from apathetic student to accomplished athlete through the help of the moody but secretly sweet Mieko and the cool yet troubled Hiromi is something that grabs you by the belt buckle and by the heart strings. The writing sucks you in through the screen into the story environment so well that you can almost smell the chlorine and hear the lapping of the water against the tile. The characters are well defined with a great deal of development from beginning to end. To add to this ambiance is a soundtrack that is simply astounding and subliminally evokes a strong mood in one’s mind with every scene. The driving metal track during the argument scene between Hiromi and Mieko conveys the fury of the two women struggling for Kaede’s affections while the cacophony of the awkward track leaves the viewer at a loss not too dissimilar to our hero. More than that, the general background tracks give the experience a very aquatic feel from calm to exhilarated. Though the artwork is much what would be expected of such a semi-animated game, it’s very well done and the scene stills convey the action in such a way that it seems to be better than if it had been fully animated.

The only potential downside is, despite an impressive set of sound effects, there is no character voice content. It should be noted that with the combined stimulation of all the other elements, your imagination seems to be able to synthesize the voices quite well internally. However, it would have been a better visual novel to have had some voice acting for the characters. There is, of course, the inevitable dichotomy between the Steam-sanitized version and the full-on R18 version of the game. While you can play without the H scenes, why bother if you can’t fully experience the passion of this aquatic trio and the romantic bond they build? I’d rather feel the love.

If you’re looking for a non-yaoi swimming club story, then you should really give this visual novel a few laps. It has everything you want from the casual viewer to the most discerning, school swimsuit-obsessed weeboo. If you like high school drama and romantic comedy with a happy ending, in more ways than one, then you should dive into Sakura Swim Club.

UPDATE: A new voice pack was released earlier this year. The voices for our two heroes, Mieko and Hiromi, are fantastic. The dialogue is well structured with the proper pauses and inflections. That said Mieko’s voice is a bit sharp, which can be an issue if you’re playing while listening through headphones. However, they are the only voices in this game. It would have been interesting to know what Kaede’s father sounded like or the teacher of Kaede’s class. Considering the popularity of the game, I suspect we might hear their voices soon enough. 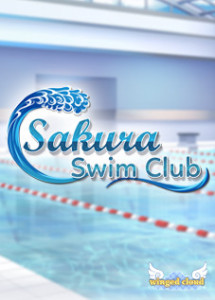