I sometimes wonder how things end up so perfect for me when I review games. I had another hell of the day on the job with enough stress to make one’s hair go white. Though exhausted, I had just enough energy to flick the mouse and open my email account. In it was a package from Sekai Project to review a new game. Being the punk rock lad I am, I chose Atom Grrrl!! to begin my next round of video game reviews. After extracting the files and starting up Wine, I opened the game to see the Cosmillica logo, a tall stack of triple decker hamburgers with the Confederate St. Andrews Cross superimposed over it. Then I got to the saloon-style menu and…the rest is history.

To begin with, this story is as if Thema and Louise and Pulp Fiction had a bastard child that came of age on a yuri blog site. Our story involves the damned duo of Jessica Huster and her ever present companion Anna. The two leaders of a gang called The 99th Floor, they keep the peace on the corrupt and hopeless streets of Las Vegas. The next in line to the great mafia family Huster, Jessica is the queen of the youth underworld, just returning from a long stint in Yamato (read: Japan). After being picked up from the airport and discussing ala Jules and Vincent the differences between Yamato and America, the pair find themselves at the offices of the chief female gangster of Sin City, Big E. After receiving instructions from Big E to deal with a casino operating on her turf, Jessica and Anna then take some “personal time” before dealing with the offending casino. Little do either of them know, the casino is owned by Jessica’s own cousin, Very, as part of her plan to succeed as the head of the Huster family. Through the misadventures of a bungling drug dealer, catgirl trysts, and Jessica’s own bad bet in the very casino she is supposed to be taking down, the story goes from five different points into a spectacular, cinematic collision with our two heroes cuddling blissfully as chaos rages outside.

In general, this is quite an interesting visual novel and a decently done one at that. The art is crisp and clean with an excellently done set of backgrounds. However, I did find the painted-over photo motif to be a tad bit tacky. The storyline is very good and, though disjointed in a Tarantino-esque manner, it still remains coherent. On top of that, the yuri scenes were quite interesting as well. In fact, as a bonus for all you lonely lads and lasses out there, they have no mosaic for your viewing pleasure. The characters were quite well developed and had many memorable traits. The only real exception to this is the slingblade strap-on used by Big E that will make you never conceptualize a futinari hentai the same way ever again. The audio was a different story. I really liked the opening theme, which constantly invoke memories of CKY’s Suddenly Tragic. The remaining background tracks remind me of the pop rock styles of the late 90s/ early 00s and gave the game a kind of smooth acoustic aesthetic. What is more, the voice acting is very well done, especially in respect to Anna and Jessica. Finally, the sound effects were very well chosen and crafted from the shot/ricochet sound effect used in the main menu to the background gaming machine sounds in the casino.

These facts notwithstanding, I had some issues as well. The story does get a bit strung out to the point where I am constantly clicking to avoid a voracious vichyssoise of verbosity that seems to make constant appearances throughout the game. I also think that there were not enough image shifts for the characters and the backgrounds had a habit of becoming stale quickly. To round it all off, some parts of the story seem to have contradictions, especially in respect to Vincent, who doesn’t approve of Jessica’s rise but won’t do anything to promote his daughter’s claim. It just doesn’t square right for me.

Overall, I did like what I saw and, if you got the time, you should give it a go. This is even more true if you are, as I am, a bonefide Tarentino film aficionado. This yuri game is worth the watch. So, load your pistol, grab a fast food milkshake, and enjoy the ride. Booyah! 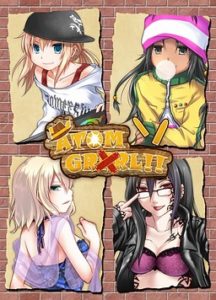